NOW AVAILABLE! The softbound edition of Inconvenient History Volume VIII is now available! Our eighth softbound annual contains 412 pages of revisionist scholarship that blasts the historical blackout and reveals the inconvenient truth of these matters.

Inconvenient History Volume VIII contains all the content from our 4 issues from 2016. You will receive a softbound book with the Spring, Summer, Fall, and Winter issues of INCONVENIENT HISTORY. 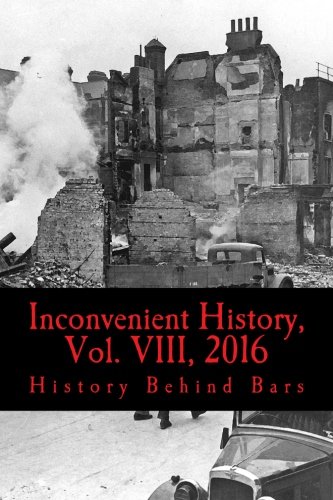 This volume features:”The Enemy is Listening!” What Did the British Intelligence Service Know about the Holocaust by Christoph Wieland, Rethinking Mein Kampf by Thomas Dalton, The Victories of Revisionism (Continued) by Robert Faurisson, The Holocaust by Bullets by Tamo Kosto, Disorder in the Courts (1990-2000), Part 2 by Joseph Bellinger, Remembering Bradley R. Smith by Richard Widmann, A Revisionist Swashbuckler: My Memories of Bradley R. Smith by Theodore O’Keefe, How the Allies Launched the Holocaust at Casablanca in 1943 by Jett Rucker, The Revisionists’ Total Victory on the Historical and Scientific Levels by Robert Faurisson, Arthur Ekirch on American Militarism by Ralph Raico, Origins of the Japanese-American War: A Conflict of Free Trade vs. Autarchy by K.R. Bolton, The Ideal of Intellecutal Freedom: A Brief History of The Revisionist by Richard Widmann, Intellectual Freedom and the Holocaust Controversy by Bradley R. Smith, Foreword to the 2nd Edition of Ecrits revisionnistes (1974-1998) by Robert Faurisson, The Conquest of the US by Spain by Ralph Raico, Free-Riding on the Juggernaut of Conscience by N. Joseph Potts, The Battle for Discussion: A Look Back by Richard Widmann, Deborah Lipstadt and the Ruling Discourse on Holocaust Studies by Bradley R. Smith, Lipstadt’s Motivations and ad Hominem Attacks by Germar Rudolf, The Taboo Against Truth: Holocaust and the Historians by Ralph Raico, Holocaust Howlers by Ken Meyercord.

But that’s not all! You’ll also get all of our challenging editorials, informative book reviews and hard-hitting commentary.