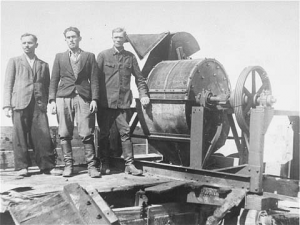 [1]An alert reader has sent us a color film of concentration-camp inmates operating a machine quite clearly the same as the one examined [2] by our Klaus Schwensen in our Fall 2013 issue!

The scene is in the three seconds between 52:38 min and 52:41 at https://www.youtube.com/watch?v=UBHwOY5nEDQ [3]. Not to spoil it for you, but you’ll note how cunningly the evil Nazi captors have set up a truly convincing “set” to make it appear that the inmates, rather than crushing their co-religionists’ bones to throw righteous post-war prosecutors off the track, are working on building or repairing a road!

I believe even the makers of the film were fooled completely.