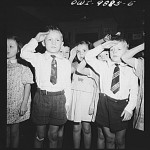 Can students handle the truth of inconvenient history?

Revisionists may feel an overwhelming sense of irony in noting educational disturbances currently occurring in the conservative bastion in the state of Colorado centered around the city of Golden.

There, reports say, students at two high schools are calling in “sick” and otherwise playing hooky while many of their teachers are doing the same thing.

The students’ cause, it would seem, is proposed revisions to the history curriculum intended to portray public affairs in the American past as more “orderly” (my word – the source is here [2]). The contention centers around recent revision (there’s that word) of the content of the US History Advanced Placement tests (this was done by the College Board, far outside Colorado) that the local school board feels portrays the United States in an unduly critical manner. While much revisionism centers on just such matters, the offending revisions [3] do not touch upon the subject of the Holocaust, another popular subject of revisionism. Pity, that, but the contrary would be much bigger news if it were true, as demonstrated recently [4] in Rialto, California.

Meantime, the teachers’ agenda, like that of other opponents of revisionism, would seem to have powerful ulterior elements – to wit, stormy negotiations between the local teachers’ union and the local school board.