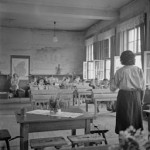 Should diversity of thought be tolerated when teaching the Holocaust?

Eighth-graders in the public schools of Rialto, California were (almost) treated to a view of the Holocaust probably never before presented in any school, public or private, in America. As a highly structured activity designed to be conducted over a period of seven days, the assignment [2] presented material from three different Web sites with which students were to develop answers to questions such as “Was the Holocaust an actual tragic historical event or a propaganda tool?” and support the answers with citations of statements from both the presented material and other material, from two extensive websites and “the library,” to be used only if the student’s teacher “allows you to.”

The included “Sources,” running to two or three pages each on average, included two “conventional” rundowns of the contents of the Holocaust package, verbatim, from two recognizable (and notionally neutral) websites, those of about.com and of history.com. The traditional understanding of the Holocaust is, indeed, well and thoroughly presented in both of them. The trouble came from Source #2, a “debunking” effort from biblebelievers.org.au modestly titled “Is the Holocaust a Hoax?” and vociferously declaiming that it is, indeed, just that (opening sentence: “Within five minutes, any open-minded intelligent person can be convinced that the Holocaust gassings of World War II are a profitable hoax.”) The content is a list familiar to most readers of Holocaust revisionist material wherein the physical and evidential impossibilities of many of the core claims of the traditional account are challenged and disproved. While better material would seem to be available elsewhere on the Web, such as on codoh.com [3], the biblebelievers effort is competent overall.

All in all, the provided content would appear to provide the young readers (if they in fact did read it) with ample ammunition to defend whichever position appealed to them. It would have been interesting to expose an adult population that had not previously been indoctrinated on the subject (Mongolian? Sri Lankan?) to the material, translated, of course, to see what sort of argumentation ensued.

But no such thing was about to be allowed, not even among the hapless students of the Rialto Unified School District, much less among the billions of the world’s “unwashed.” Rather, somehow, even though reportedly no parent, nor any pupil, in the Rialto District complained, nonetheless the Anti-Defamation League, with offices conveniently located in nearby Los Angeles, got wind of this nefarious experiment in thought and opinion, and got it shut right down. Never mind quite how—the ADL can do such things, always has, and probably always will.

At the end of this not-fully visible process, we have a spokeswoman for the District apologizing profusely and swearing that no such thing will ever again occur again in her precincts, even though certain palpably Muslim-oriented assignments [4] have already been promulgated therefrom.

Are Muslims taking over an American school district? The name of the District’s acting director is Mohammed Islam; make of that what you will. There are 13,588 or so school districts in the United States at present, of which about 977 are in California. What with the growth of religious diversity in the United States over the past decades, it would be surprising if there were not, in fact, several school districts that were overtly Muslim in their orientation, though explicit religious orientation in American school districts is nominally prohibited. In the UK, government funding is more available to operators of religious schools, and sure enough, the “Trojan Horse” [5] scandal recently erupted in the city of Birmingham, in which would-be administrators plotted such crimes as separating male students from female ones, eliminating “sex education,” and dismissing the theory of evolution.

So, does the question come down to what independence (or lack thereof) the public-education units of America should enjoy, or be prohibited from enjoying? Possibly, though the rhetoric, or invective, employed in the matter does not seem to address that underlying concept. Most published pronouncements on the matter just seem to condemn the entire concept of questioning the traditional account of the Holocaust—the one presented in Sources #1 and #3 of the assignment. That makes it a matter of Source #2, which, if it be consulted [6], would appear to offer factual challenges to the other two sources.

All right—here, then, is where the Taboo is violated. Here is where the District is arrested, charged, and convicted of . . . what? Violating the Public Trust? Teaching History That Isn’t So? Inviting thought and inquiry into areas where such is not in any way, ever, to be even permitted, much less invited? You Just Can’t Do This—at least, not with public funds, or otherwise under the aegis of fulfilling the legal requirement for the education of the young.

Fair enough—or unfair enough, if you don’t subscribe to the dictum, “I eat the King’s bread. I am loyal to the King.” There might be 977 school districts in California, but each of them is merely a wholly owned subsidiary of the California Department of Education, and that Department, by the way, is increasingly funded by the US federal government, establishing by way of funding what Thomas Jefferson and James Madison so eloquently opposed in their Kentucky and Virginia Resolutions of 1798 and 1799. We are, it would seem, all in this together, at least as far as the borders of the United States and the people encompassed therein are concerned.

Yet, so far as media reports reveal, the matter was dealt with entirely—and decisively—in the court of public opprobrium, not that dire threats of professional and legal penalties were not possible, or made. The omnipresent Anti-Defamation League somehow acquired knowledge of the assignment and duly condemned, in all media of consequence, its manifest transgressions upon the sensibilities of good people everywhere.

And that did it. Assignment withdrawn, and apologized for, profusely. Will heads roll? Will administrators be dismissed, teachers sacked, blasphemers jailed, heretics burnt at the stake? Well, the answer will no doubt be yes to the earlier-listed fates, but perhaps ultimately no to the worse ones toward the end of the list, though the transgressors will surely be well and truly chastised.

The issue of independence of school districts to govern matters of course content has already been addressed herein, and resolved in favor of what might gently be called “centralization,” or, less gently, adherence to the dictates of entrenched elites. It remains to consider what might be criticized in the assignment, as though the district in fact possessed the power to compose and impose such exercises upon its charges. The published criticism of presenting proscribed views and interpretations may be dismissed , as it has been [7] in some quarters, as naked intellectual tyranny.

But the effort, noble, subversive, or whatever moral value it might seem to any and all to embody, nonetheless displays an essential flaw, and ironically, the origins of the flaw can be traced to the very forces that produced the devastating attack that so thoroughly demolished the entire enterprise. That flaw might be labelled, not very catchingly, binarism.

The starkest manifestation of binarism common to public experience occurs in dramatic presentations of courtroom testimonies, in which an unfortunate witness, attempting to provide a meaningful answer to a question of broad implication, is hectored by the (cross-)examiner with the command, “Answer yes or no.”

Yes or no. Did “the Holocaust” happen? This is the very charge by which “Holocaust deniers,” by their very hesitation over matters such as what, exactly, is meant by “the Holocaust,” are trapped into tarring themselves with the hated brush. The wording of the assignment, unfortunately, echoes this very insidious tactic: “… explain whether or not you believe [the Holocaust] was an actual event in history, or merely a political scheme created to influence public emotion and gain wealth.”

Whatever the question(s) is, or are, this is but a stick-figure representation of it (them). Admittedly, it’s a challenge where one is dealing with eighth-graders whose interest is most-likely not aroused in the first place, to impart nuance or even relativity in a deductive challenge such as the creators meant to pose here, but yes or no? This is a fundamental flaw in an assignment meant to stimulate the drawing of positional conclusions from information that obviously, across Sources 1 through 3, contains contradictions. Is there, can there be, could there be, no middle ground, in which truths are recognized on both sides, and falsehoods or exaggerations are acknowledged where they occur, or are suspected?

This whole quibble is, unfortunately, utterly moot. The matter was dealt with by way of smear and defamation. Perhaps the public at large—never mind the eighth-graders questing for discernment, or at least knowledge—neither desire nor deserve anything better.

But those of us adults (no matter how young) with a deeper interest in the matter can gain much from an exploration of the particulars of this incident. At bottom, the teaching of “history” by governmental units is an altogether suspect enterprise to begin with. No less a luminary than Ludwig von Mises (Austrian economist 1881-1973) declared that governmental schooling is fit for teaching nothing more than reading, writing and arithmetic, assuming, of course, that governmental schooling is to be tolerated in the first place.

Issues of what control any of the 13,588 districts might exercise in the content of what is taught arose here, and were dealt with in terms of contemporary realities. Matters of the influence of a religious culture but little present in the American religious constellation until recently were alluded to, documented, and otherwise accorded little value in reaching conclusions. And vital flaws inside the initiative attempted in Rialto were considered, to little effect upon the outcome of the public transactions involved.

It was all very interesting, this Rialto thing was.

Ultimately, they will fail. Something different will come to dominate.

I only hope it will be less tyrannical than the present regime.