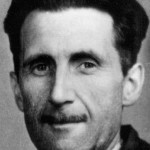 Orwell was educated in England at Eton College. After service with the Indian Imperial Police in Burma from 1922 to 1927, he returned to Europe to become a writer. He lived for several years in poverty. His earliest experiences resulted in the book Down and Out in Paris and London.
By 1936, Orwell had joined the Republican forces during the Spanish Civil War. Orwell was critical of communism but basically considered himself a socialist. He was wounded in the fighting. Late in the war, Orwell fought the communists and eventually had to flee Spain for his life. He documented many of his experiences during the Spanish Civil War in his Homage to Catalonia.

Orwell’s experiences with totalitarian political regimes had a direct impact on his writing. His best-known books reflect his opposition to totalitarianism: Animal Farm and Nineteen Eighty-Four. In an article entitled, “Why I Write” Orwell explained:

Every line of serious work that I have written since 1936 has been written, directly or indirectly, against totalitarianism… Animal Farm was the first book in which I tried, with full consciousness of what I was doing, to fuse political purpose and artistic purpose into one whole.

During the Second World War, Orwell wrote a weekly radio political commentary designed to counter German and Japanese propaganda in India. His wartime work for the BBC gave him a solid taste of bureaucratic hypocrisy. Many believe that this experience provided the inspiration for his invention of “newspeak,” the truth-denying language of Big Brother’s rule in his novel Nineteen Eighty-Four.

Throughout his lifetime, the great English author continually questioned all “official” or “accepted” versions of history. At the conclusion of the war in Europe, Orwell expressed doubt about the Allied account of events and posed the following question in his book Notes on Nationalism, “If liberty means anything at all, it means the right to tell people what they do not want to hear… Is it true about the gas ovens in Poland?”

Orwell died on 21 January 1950 in London at the early age of forty-seven of a neglected lung ailment. He left behind a substantial body of work and a reputation for greatness.