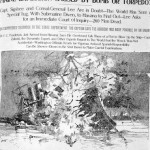 Sinking of the Maine used to incite war hysteria

April 25th marked the anniversary of the Spanish-American War. While barely a notice appeared in the American media, the Spanish-American War of 1898 was instrumental in transforming the United States into an empire. It also established a precedent for the subsequent conflicts of the 20th Century in that the media played a major role in disseminating propaganda intended to rouse public support for war.

In early 1898 President McKinley sent the USS Maine to Havana to protect American interests during the long-standing revolt of the Cubans against the Spanish government. On the evening of 15 February, a mysterious explosion suddenly blew up the Maine. Nearly three-quarters of the battleship’s crew died as a result of the explosion. The immediate assumption was that the sinking of the Maine and the deaths of 260 sailors was the result of Spanish treachery.

In their article, “The Fateful Year 1898: The United States Becomes an Imperial Power” John Ries and Mark Weber comment,

Without a shred of real evidence, the “yellow press” and prominent individuals immediately blamed Spanish authorities for the disaster. Even though Spain had no rational motive for provoking the United States, and no evidence of Spanish guilt has ever come to light, the incident was instantly seized upon to inflame passions for war. Headlines in the New York Journal (February 17) told readers that “Destruction of the War Ship Maine Was The Work of an Enemy,” that “Assistant Secretary Roosevelt Convinced the Explosion of the War Ship Was Not an Accident,” and that “Naval officers think the Maine was destroyed by a Spanish mine.” (Hearst’s Journal would later shamelessly take credit for the Spanish-American war itself.)

On April 25, 1898 the United States officially declared War on Spain.

War hysteria and newspaper sales grew along with the coverage of the conflict. A reporter commented that there was “a factory out there for faking war news.” That factory would later turn out vicious war propaganda in the major world conflicts which followed. Senator Hiram Johnson would famously write, “The first casualty when war comes is truth.”

It would later fall to a small but dedicated group of revisionist historians to attempt to bring history into accord with the truth.