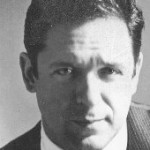 In the middle of March, I was informed of the passing of Joseph P. Bellinger. The old adage “bad news travels fast” proved to be inaccurate. Bellinger, who was born on 13 September 1949 had passed away on 20 October 2013 after a long battle with throat cancer.

While Joe may be best remembered as the author of Himmlers Tod. Freitod oder Mord? Die letzten Tage des Reichsführers-SS, I remember him as a friend.  A true book enthusiast and collector of historical volumes, Joe was instrumental in obtaining a nearly complete set of David McCalden’s Revisionist Newsletter for me. Joe was also very enthusiastic about the idea that resulted in Inconvenient History. From 2009 through 2013 he served as a member of our Editorial Advisory Board.

Bellinger spoke at several revisionist conferences and published many articles on various aspects of the Second World War.  At the time of his death, he was writing a new book on the subject of the persecution of revisionists around the world, The Prohibition of “Holocaust Denial.”  We are currently in the process of editing various chapters from this work to prepare them for publication in future issues of Inconvenient History.

For further reading, I recommend these works: