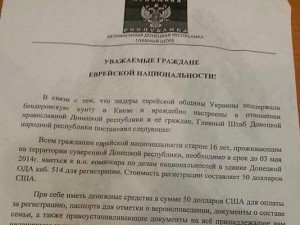 Abe Foxman, venerable head of the Anti-Defamation League, hasn’t exposed many false-flag attacks during his long career, but a peculiar echo of the Holocaust in eastern Ukraine has drawn just such a reaction from him.

It’s Byzantine. As this article [2] details, Jews exiting a synagogue in Donetsk this Pesach just past were handed an ominous letter apparently from the local Russia-favoring militia instructing them to register with the local government as Jews (no report of anyone attempting to do so has surfaced as yet).

Foxman, likely an expert in such things, smelled a rat: the pro-Western faction that had recently gained the upper hand in Kiev, might very well have fabricated this Nazi-redolent tactic in order to discredit its opponents, who are frequently the targets of smears as Neo-Nazis and other flavors of anti-Semites.

Foxman’s decrying of this tactic is very much to his credit. What he may have failed to mention is that the pro-Western faction he implicates is itself subject to analyses that reveal it to be suffused with Jews and even foreign Jewish (e.g., Victoria Nuland of the US) influence.

It’s all very complicated. And rife with historical overtones, to those of us attuned to such things.