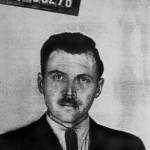 Dr. Mengele’s “Medical Experiments” was our most read article of 2013.

To say that 2013 was a great year for Inconvenient History  (IH) would be putting it mildly.  While accolades have been made about the quality of our materials, the proof is in the proverbial pudding (as they say.)  Throughout the year, some 58,729 people visited the IH Website.  This represents a 40.95% increase over 2012.   Over 172,700 pages were viewed which represents a 19.31% increase over the prior year. Our single best day ever was December 14th, when some 4,206 pages were accessed.

For those of you with a technical bent, the most popular browsers for reading IH are: Firefox, Chrome, Internet Explorer, and Safari.

Our Top Ten most-read articles for the year were:

Two very interesting trends become clear from considering this list.  Our top two articles, by leading revisionist scholars, Carlo Mattogno and Robert Faurisson were only posted in late November and managed to top the list with only one month of availability to our readers.  Clearly Mattogno and Faurisson are big draws.  Secondly, many of the most read articles come from prior years of IH; some dating all the way back to our first volume in 2009.  Clearly one great advantage of on-line publishing is the continued readership of older material.  Thomas Dalton, author of Debating the Holocaust: A New Look at Both Sides, also deserves some special mention for having 3 articles in our top ten.

In addition to the main Website, we managed (largely due to the efforts of Assistant Editor Jett Rucker) to get all four of our hardcopy annual editions back in print and available through Amazon.com.  This was a significant achievement after the enemies of truth managed to get our previous Print-on-Demand publisher to buckle and to cease distribution of our volumes.

In 2013 we also turned our attention to Social Media. IH established a significant presence on Twitter.  To date we have made 773 tweets and have found an audience of 196 followers.  We are working on activating statistical analytic tools to determine just how broad our readership is on Twitter – one can read tweets without necessarily being a follower, which guarantees that our readership is far greater than our number of followers.

We also have great things planned for 2014.  Our hardcopy Annual Volume 5 is currently being edited and promises to be a classic that all revisionists will want for their libraries.  We are also working diligently on the content for our 2014 issues.  It’s pretty clear that 2014 will be an inconvenient year for the enemies of free historical inquiry.

This article originally appeared in Smith’s Report No. 202, February 2014