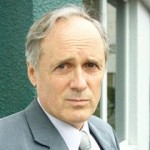 Though it could have been from an assassin’s bullet or a terrorist’s bomb so virulent and persistent were the threats against him, Catholic attorney Douglas “Doug” Christie, Canada’s premier defender of the damned, the marginalized and the downtrodden, has died at the age of 66 from cancer, which he had been battling for approximately two years. He worked virtually up to the time of his death. He is survived by his magnificent wife, Keltie, who shared in his battle for freedom, and two lovely children who are pursuing law and engineering careers, respectively.

Christie stood up for mostly indigent Canadian “thought criminals” who were victims of censorship and prosecution directed by a government-backed, misnamed “Human Rights” cabal which seeks to protect Judaism, Zionism and Holocaustianity from the same kind of scrutiny and skepticism which every other religion and ideology faces in the marketplace of ideas.

If the criminal and civil prosecution of heretical speech and press had been suffered by Zionists and rabbis  in Canada, the New York Times and Fox News would have been stuffed to the gills with regular reports and alarms. Instead, the whole sorry Orwellian ordeal of Canada’s independent thinkers has been largely flushed down the memory hole by the U.S. corporate media, which are content to stigmatize and dismiss the dissidents Doug defended, as “anti-semites” and “Holocaust deniers,” the better to deny their humanity in the name of human rights.

For truth seekers and lovers of liberty, the loss of Doug Christie is an incalculable one. His life of sacrifice and idealism is a shining paradigm. May he rest in peace. Our thoughts and prayers are with his family.

Reposted with Permission from The Hoffman Wire: