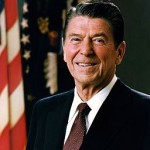 This morning I found several emails asking and discussing whether a recently posted YouTube video of Ronald Reagan was real. Following the links, I found a short 9 second video of Reagan supposedly questioning the six million Holocaust story.  In the short excerpt Reagan says, “I challenge your history again. There is absolutely no record that six million people were put in concentration camps. They only have 16 million to begin with.”  But something is clearly wrong with this video.

First, the excerpt is taken out of context.  What was Reagan really speaking about?  The excerpt appears like those vintage World War II photos with incorrect captions asserting that something is there in the photo when it is not.

A quick examination reveals that the footage is indeed real and was taken in 1967.  But wouldn’t such footage have been used against Reagan in his various political campaigns including two for the presidency?  And, even if buried at the time, surely such footage would have come out during his controversial visit to the Waffen SS cemetery at Bitburg.  But, I have no recollection of such comments.

Today, however thanks to the power of the Internet, one is able to answer such questions in minutes.  The short clip was indeed Reagan and it was taken in 1967.  However, the topic was not the Holocaust.  In fact, during a CBS Television and Radio broadcast on May 15th hosted by Charles Collingwood, then Governor Ronald Reagan was debating aspects of the Vietnam war with then Senator Robert F. Kennedy.

Jeff Jordan asked Reagan whether he approved that the Diem regime put six million in forced prison camps and that American advisors did nothing “but help them in this.”  To which Reagan responded,

“I challenge your history again. There is absolutely no record that six million people were put in concentration camps. They only have 16 million to begin with. Now, I’d also like to challenge something else about the supposed evils of the Diem regime. I do approve of Diem’s land reform in which he took from the great mandarin holdings, and began to make land available to the peasants and to the people of Vietnam, who had never owned land before. But also, I would like to call to your attention that a team from the U.N. was sent to Saigon, Vietnam, to investigate the charges against Diem’s regime They did investigate those, but as they returned to this country, Diem was assassinated, which I think was one of the great tragedies of this whole conflict; and the United Nations report, which they declined to make official because they thought why bring anything up now that he’s been killed, has on the other hand, been published, there has been public access to it, and the United Nations report completely cleared the Diem regime of any of the charges that had been brought against him.”

And thus in minutes our 9 second clip is exposed as a complete hoax.  I certainly hope that this hoax disappears quickly from the internet and is not passed around by those who think they have found an ally in Ronald Reagan. This video post, with it’s false caption, asserting a Holocaust connection does a disservice to all interested in historical truth.  It, along with its originator, should be denounced from all quarters.